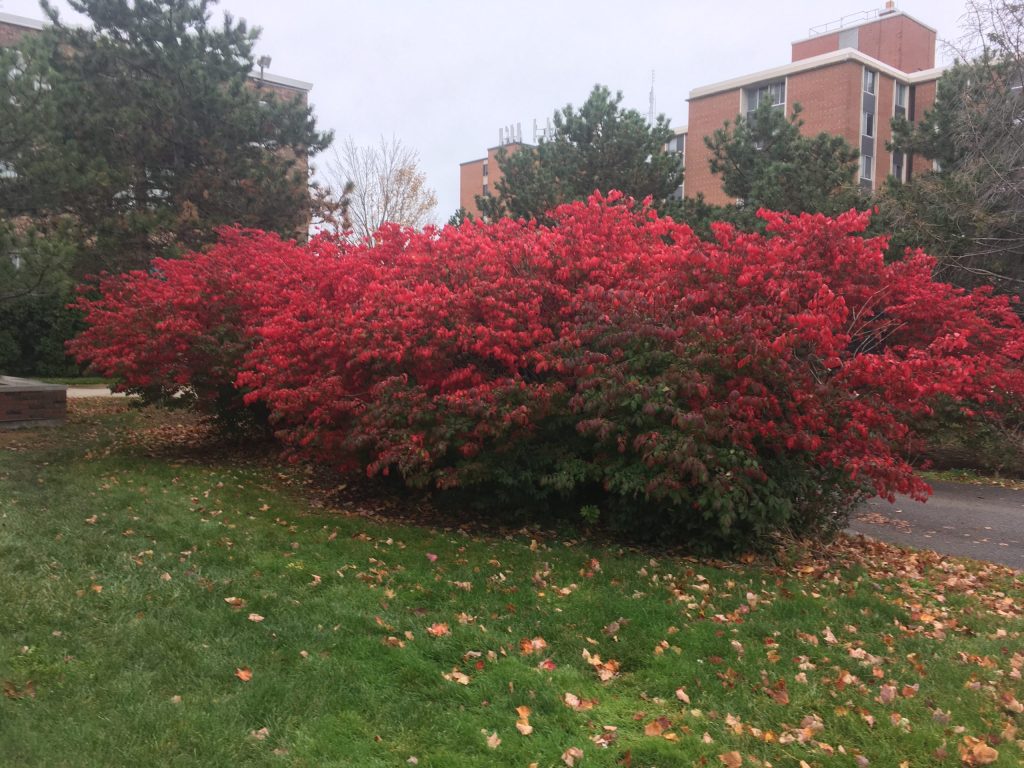 At this time of year, there are some very compelling plants in the landscape, strikingly beautiful as they take on their amazing fall color.  One of the loveliest to look at is Euonymus alatus, commonly known as burning bush or winged euonymus.  Its foliage and unusual fruit begin to turn bright red in October and are highly visible in the landscape.

This plant’s fall color is one of the primary reasons it became a staple in the nursery trade, also because it is extremely adaptable to many landscape conditions.  But, don’t let the beautiful fall color of Euonymus alatus fool you – it is a serious threat to many of our forests, as it aggressively displaces our native understory plants.

From Whence it Came

Burning Bush was introduced in North America in the 1860’s as an exotic ornamental plant from Asia.  Its native distribution extends from central China to northeastern Asia, including Korea, Japan, and the Sakhalin islands of Russia.  Like many plants now considered invasive in the U.S., it was brought to America for its novelty and exclusivity. Botanical gardens and botanists would typically be the first importers of such plants, then landowners with money and “taste” would follow, making a statement by planting these exotic plants in their landscapes.

Invasive Threat in Many States

Euonymus alatus eventually escaped cultivation and was acknowledged to be invasive in the 20th century, mostly in the Northeastern U.S.  It now occurs in at least 25 states, as far west as Montana, and as far north as Ontario, Canada.  The plant is expected to continue to invade additional states and provinces.  It spreads with the help of birds, as they eat the mature fruit and eliminate the seeds as they travel.  The fruit is quite striking – bright red capsules which split open, revealing bright orange seeds.

The plant is frequently referred to as winged euonymus, due to the brown, corky “wings” or ridges along young stems.  This distinguishing feature may not be evident on cultivars.  The species plant can reach a mature size of up to 15 ft high x 15 ft wide, and can grow in sun or shade, good soil or poor soil.  It is particularly adept at invading disturbed habitats, especially forest edges, roadsides and fields.

Remove and Replace with Native Alternatives

My advice is to avoid planting Euonymus alatus altogether, even the cultivars.  There is evidence that some of the supposedly sterile cultivars can hybridize naturally, even though they are not supposed to!

Some landowners opt to cut off the flowers of Euonymus alatus to avoid the spread of maturing fruit seeds. While this may seem a reasonable way to keep the plant from spreading, it is difficult to get everything. Migrating birds desperately looking for a food source in the fall will find the fruit and spread the seeds.

It is a much better idea to remove any Euonymus alatus on your property and replace them with regional native plants which are appropriately adapted to your environment and also provide genetic diversity.

Fall is a great planting season.  Plant some natives this weekend!
from Kim Eierman at EcoBeneficial!