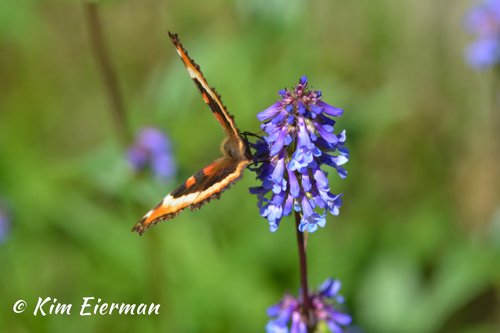 Where Are the Bees, Butterflies and Other Insects? Facts & Tips

From individual observations to published research, the situation seems clear – insect populations are declining across the globe. It’s a crisis that gets little play in the media, surpassed daily by “news” of unhinged political tweets or the latest Kardashian romance.

Anecdotal evidence is abundant – recent posts on NABA Chat (North American Butterfly Association) from across the country report a decline in butterfly populations in many areas. Home gardeners and environmentalists are reporting a scarcity of bees in their summer landscapes. Individual reports are helpful, but scientific research is supporting these personal observations.

Dr. Rodolfo Dirzo et. al. reported some troubling statistics in Science (25 Jul 2014: Vol. 345, Issue 6195, pp. 401-406). These scientists noted strong evidence of declines in the abundance of butterflies and moths across the globe – a 35% decline over 40 years. But, that’s not the worst news – lepidoptera (butterflies and moths) are faring better than many other types of insects. In analyzing available data, the scientists found that the global invertebrate population has declined by 45% over the same 40 year period. 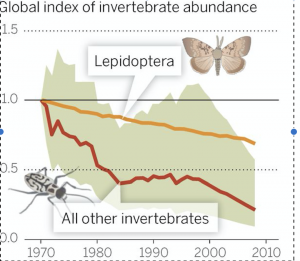 Bees seem to get the most press of invertebrates, but even that coverage is fairly minimal. The latest annual report on honey bees, published by the Bee Informed Partnership, earned barely a nod in the media. Surprising, because the news wasn’t good. The results from their April 2015 – April 2016 survey were troubling. U.S. Beekeepers reported a loss of 44.1% of managed colonies – 3.5% worse than the previous year. Especially concerning – summer losses were significant – a time of year when bees should be thriving.

A study published in Science (27 Mar 2015: Vol. 347, Issue 6229) by Professor Dave Goulson et al., concluded that “species richness of wild bees and other pollinators has declined over the past 50 years with some species undergoing major declines and a few going extinct.” No, it’s not just your imagination.

Let’s not forget about our native bees, which have been studied far less than honey bees. Goulson and his collaborators noted that a number of studies point to a decline in many species of “wild” bees.” Of particular note, surveys in Illinois over a 120-year period through 2010, show that 50% of wild bee species have become extinct in that state.

Invertebrate population health is an issue that most people don’t even consider – often thought to be the responsibility of governments and environmental groups. We should all be concerned about these tiny creatures in our landscapes, and not just pollinators. Insects are critical components of our ecosystems – important protein sources for many other species, including birds. Even some omnivores, like foxes, depend upon insects for a large part of their diet.

What can we do to fight invertebrate loss? The first line of battle is your own landscape.   Here are 13 tips to help you:

1) Increase the diversity of flowering native plants in your landscape.
Many insects, not just pollinators, use nectar and/or pollen. Not all insects are attracted to, or can access, the same type of flowers. Offer a diversity of blooms to support many different insect species, emphasizing the native plants insects have evolved with.

2) Plant diversely, but plant sufficiently.
Create floral targets that insects can find easily. Mass the same species of plant or create a repetition of bloom throughout an area in your landscape for a “meadowscape” effect.

3) Insure a succession of bloom in your landscape throughout the growing season.
Not all insects are active at the same time of year, and insects may require different plant resources at different stages of their life cycle.

4) Include host plants, not just forage plants, to support butterflies and moths.
Your most valuable “butterfly book” may be a book on caterpillars that details their host plants. Many native trees, shrubs and grasses are important host plants. Think beyond perennials to support insects.

5) Provide habitat, not just food sources, for insects.
Some insects, like the majority of native bees, will nest in bare ground. Some bee species prefer cavities such as old mouse holes, gaps in rotting logs, standing dead trees, or cavities in pithy plant stems. Other insects might find a home in a rock wall or in leaf litter. Emulate natural ecosystems in your own landscape to support a variety of insects. A rotten log can be a beautiful thing!

6) Don’t forget to support insects over the winter.
Leave perennials standing through winter as shelter for some overwintering insects. Leave leaf litter in place – it’s valuable winter habitat for many invertebrates that may feed migrating birds when they return in the spring.

7) Tolerate some plant damage in your landscape.
The “damage” may not be damage at all, but perhaps just a butterfly caterpillar chewing, or a leafcutter bee taking what she needs. A healthy landscape supports an abundance of insects.

9) Limit the use of organic pesticides.
Before considering organic pesticides, first determine if there is a problem and, if so, if it is really worth treating. Some landscape issues can be handled with better cultural practices – like cleaning up infected leaves from under a plant, or providing better air circulation to crowded plants. If you need an organic product, try to select a narrow spectrum treatment, not a broad spectrum one. Remember that “organic” does not mean “benign.” The goal is nature in balance, not perfection.

11) Don’t purchase and release beneficial insects from other states.
Purchased beneficials may introduce new pests and diseases to your landscape and beyond. The best practice is to attract beneficial insects with the native plants and habitat they need.

12) Get a sign for your landscape.
Spread the word that insects matter by getting a sign from the Xerces Society, Beyond Pesticides, etc.  Help your neighbors connect the ecological dots.

13) Provide a safe water source.
Many insects need a clean source of water – not your birdbath!  Give insects a safe place to hydrate by filling small ceramic saucers with small pebbles or gravel, and top it off with water.  The pebbles will allow insects to perch without drowning. Place the saucers away from bird baths or bird feeders so insects don’t become easy prey for birds.

Changing our landscaping practices can make a tremendous difference in supporting invertebrates, but don’t stop there. We need to advocate for better agricultural practices. Invertebrate health, and human health, depend upon it.

Pick up a Pollinator Packet in the EcoBeneficial Store for more useful tips.