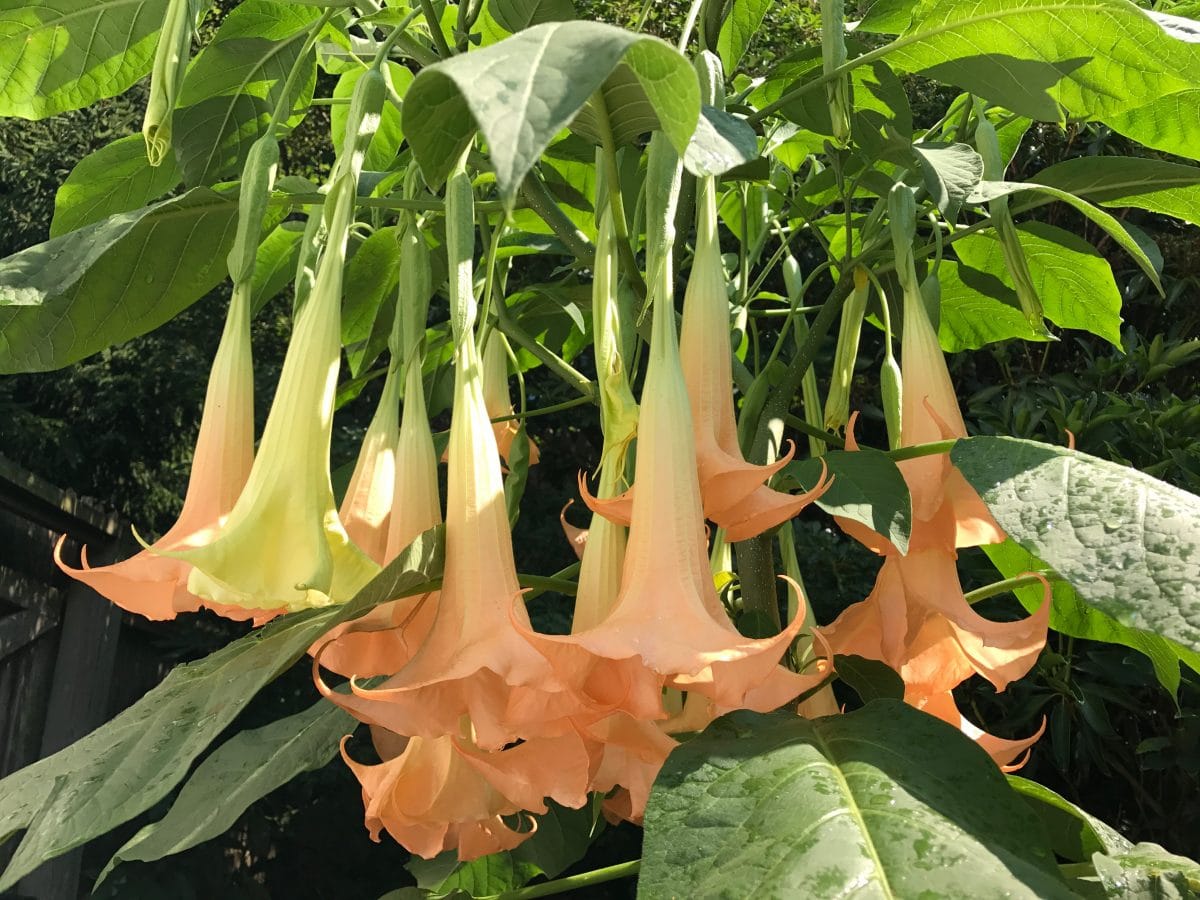 It started innocently enough. While volunteering at a plant sale held by Lasdon Park, a local arboretum, I spotted a dozen or so lanky, young Brugmansias for sale. The plant-loving staff, had scored these tropical wonders, offering them for sale amid a treasure trove of native and ornamental trees and shrubs. But the Brugmansias stood out, calling like a siren to every plant geek there.

Brugmansia, commonly known as Angel’s Trumpet, is a group of seven plant species native to South America. Sadly, they are listed as extinct in the wild by the IUCN. A Brug’s gargantuan blooms are sweet and seductive and it does have hallucinogenic properties. Each flower measures an extraordinary 8 to 20 inches long, filled with an evening perfume that belies the plant’s toxicity. It’s safely cultivated by many gardeners – relax and enjoy the show, just don’t eat it!

At the plant sale, the tall, skinny-girl Brugmansia trunks seemed far too weak to hold their umbrellas of over-sized tropical leaves. No blooms yet, but the promise of humungous trumpet-shaped, fragrant flowers was a compelling force – “buy me, buy me, I’m only $20.” The siren’s call was hard to resist. 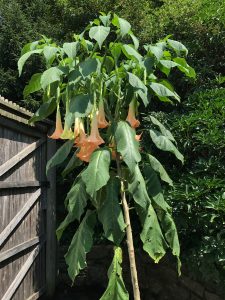 The Brugmansias were snatched up like wedding dresses on sale at Filene’s Basement. Truth be told, most customers had no idea what they were buying – the Brugs just looked really intriguing. Soon there were only five Brugs left, then four, then three and then just two. Time to make a decision. For $20 apiece, these tropical show stoppers seemed a bargain too good to pass up. Could I? Would I? Should I? The conscience of a dyed-in-the-wool native plant evangelist runs deep.

I went AWOL and put pure plant satisfaction ahead of ecological value. I’m a plant geek – I couldn’t help it. I had seen Brugmansias growing in Costa Rica and was immediately seduced by their blooms. Twenty dollars and 10 years later, I had my own Brug. 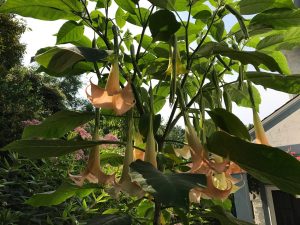 After shelling out a twenty, I scrunched the five-foot exotic beast carefully into my car. Getting it out was worse – a lost leaf or two, a rip and a tear, it didn’t care, my Brug wanted to see its new home – my backyard patio, where it would soon dominate, holding court over my native perennials in containers.

Did I mention that my Brug was only $20? Hmm… It seemed so cheap at the time. In my Angel Trumpet fever, I had forgotten the demands of fussy, non-native tropical plants. Spoiled by the carefree habits of my native plants, I now answered to a demanding new master.

First purchase – a large new container to hold the Brug’s expanding roots, now outgrowing its tiny nursery pot. Next, a rolling plant caddy to move the beast around. Then, two large bags of organic potting soil to fill the voluminous new pot. And finally, organic fertilizer with a Brug-friendly N-P-K, to quell the Angel Trumpet’s constant hunger. Only the best for my Brug. 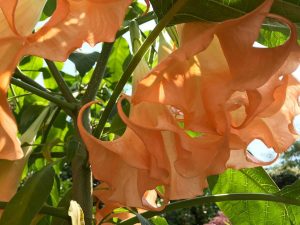 I now own a $160 Brugmansia. Payback from the natural world. You stray, you pay.

I don’t feel too badly about my exotic indulgence.  The Brug’s flowers are breathtaking. Now, where the heck will I overwinter the damn thing?