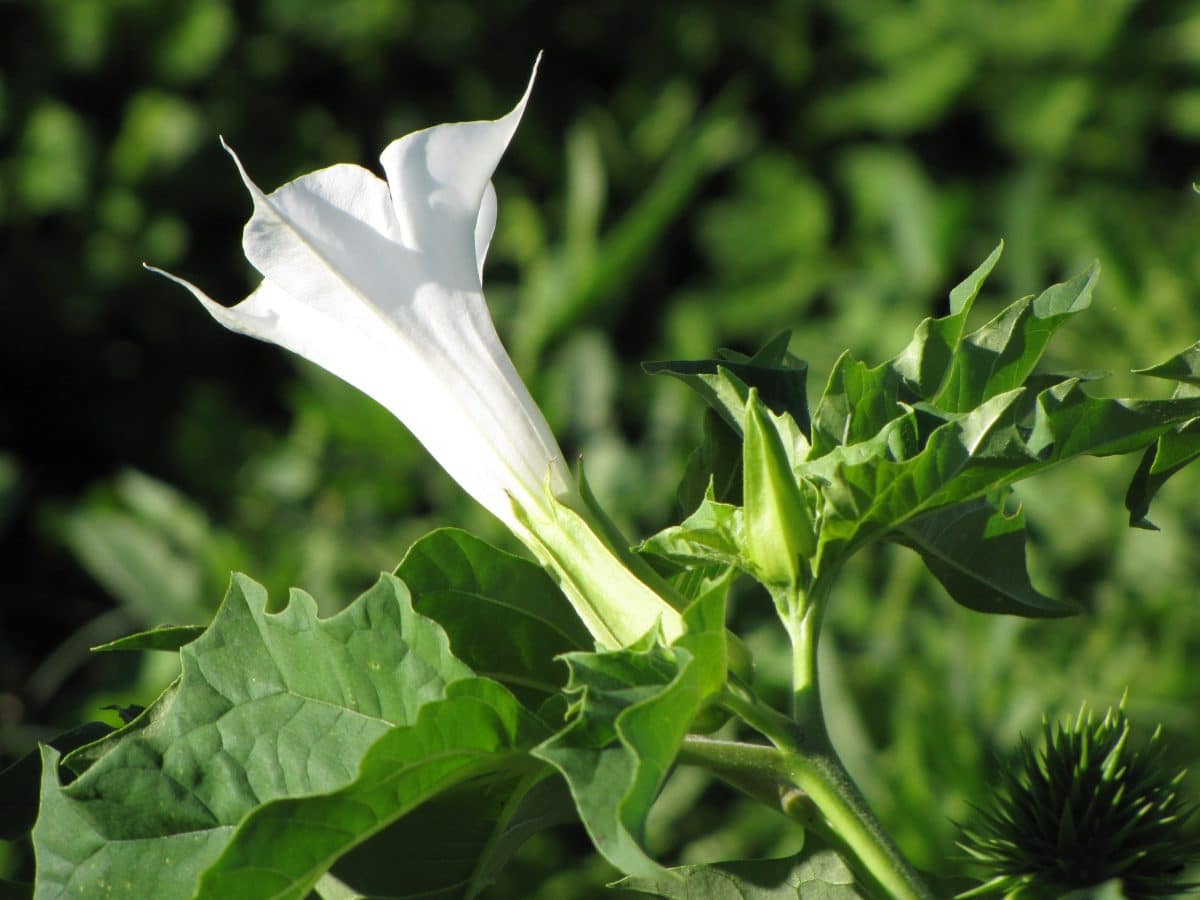 Does This Plant Have Any Virtues or Is It Invasive?

What are the benefits of Jimsonweed?  Are there any virtues to this plant?  It seems to be a common, aggressive, but interesting “weed.” I’d like to keep some of it and mix with other beneficial plants in the New York area.

While not quite as overwhelming to an ecosystem as Japanese Knotweed, Datura stramonium (Jimsonweed) is problematic. Thought to have originated in Central and/or South America, Jimsonweed has naturalized across the globe and can now be found in North, Central and South America, Europe, Asia, Africa and New Zealand.  Considered a weed in more than 100 countries,  Jimsonweed can be found throughout most of the U.S, except for Idaho and Wyoming (only a matter of time…).

Jimsonweed has not yet been included on the invasive species list in New York State, but seems a likely future candidate since it is listed as invasive in Connecticut and as a noxious weed in Pennsylvania.  The plant’s proliferation, especially in nearby states, is reason enough to eliminate it from a New York landscape.

An annual plant, Jimsonweed reproduces by seed, and it can produce a lot of those seeds – up to 30,000 seeds per plant. Those seeds can remain viable for several decades.  Jimsonweed is usually self-fertile, so the plant can proliferate without the assistance of pollinators. Nectar-seeking Sphinx moths are attracted to the large, odoriferous flowers, but a number of native plants are also compelling to those insects including Asclepias syriaca (Common Milkweed) and Oenothera species (Evening Primrose).

Datura stramonium has been used medicinally, but more notoriously as a hallucinogen; it can be fatally toxic at slightly higher doses.  Also known as “Jamestown Weed,” Jimsonweed was first recorded in the U.S. in 1676 in Jamestown, Virginia when British soldiers were in town to suppress a settlers’ rebellion. The soldiers used the plant as a narcotic and endured an 11-day stupor.  Robert Beverley Jr. wrote about their delirium in The History and Present State of Virginia, Book II: Of the Natural Product and Conveniencies in Its Unimprov’d State, Before the English Went Thither:

“…they turned natural fools upon it for several days: one would blow up a feather in the air; another would dart straws at it with much fury; and another, stark naked, was sitting up in a corner like a monkey, grinning and making mows [grimaces] at them.”

“In this frantic condition they were confined, lest they should, in their folly, destroy themselves—though it was observed that all their actions were full of innocence and good nature. Indeed, they were not very cleanly; for they would have wallowed in their own excrements, if they had not been prevented. A thousand such simple tricks they played, and after eleven days returned themselves again, not remembering anything that had passed.”

Probably a good idea to lay off the Jimsonweed…

There are 9 species currently classified as Datura, both annuals and biennials, with differing levels of aggressiveness. Daturas have erect or spreading flowers and tend to be shrub-like in form. Brugmansia is a related genus of plants that are taller, woody, self-sterile, and have sweet-smelling, pendulous flowers.  Brugmansias are also toxic.

Please do pull that Jimsonweed!