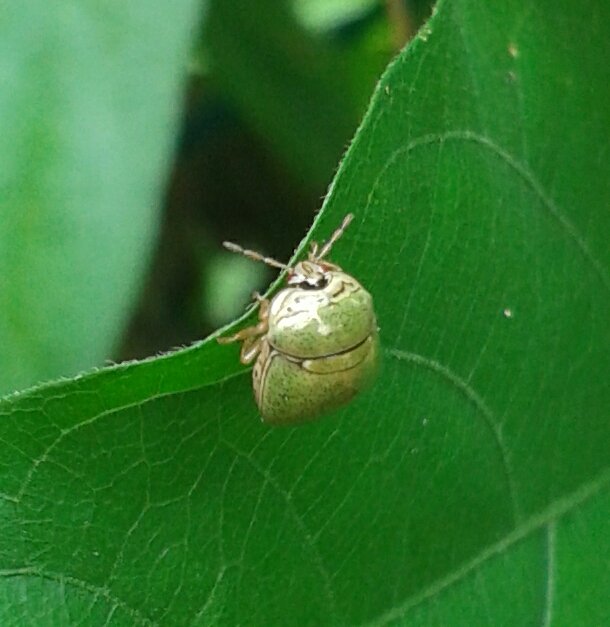 Where did the Kudzu Beetles Go?

A number of years ago, my trellised legumes were inundated with kudzu beetles for the first time. I have not seen one since. What happened?

Thanks for your question. The kudzu beetle or kudzu bug, Megacopta cribraria, is an invasive insect from Asia. It was first noticed in the U.S. in Georgia in 2009 and is now prevalent throughout the Southeastern U.S.  This little pest has piercing-sucking mouthparts and feeds on the stems and petioles of various legumes.  The invasive plant thug, kudzu, is a favorite target, but so are agricultural legumes such as soybeans, edamame, and pigeon peas. You will also find the kudzu beetle lounging on other non-target plants, which can be confusing.

It’s hard to say exactly why the kudzu beetles have vanished in your area.  But, there is a possible explanation. There is a parasitic wasp, Paratelenomus saccharalis, which is very effective at controlling the kuzdu beetle. An Asian species, like the kudzu beetle itself, this wasp has evolved with the beetle and is an effective predator of the nuisance insect.

Researchers have studied the potential of Paratelenomus saccharalis as a biocontrol. In 2012, researchers applied to the USDA for release of this wasp as a biocontrol for the kudzu beetle.  I have not seen any confirmation of the official release. That doesn’t preclude their presence, though!

According to Jennifer Miller at the University of Georgia, it appears that a number of these predatory wasps escaped during the research process and have been found in several states. Perhaps your landscape is one of the lucky recipients.

Some other beneficial insects, such as tachinid flies, also prey on kudzu beetles among other landscape pests.

There is also fungal pathogen that helps control kudzu beetles, called Beauveria bassiana.  This fungus occurs naturally in soils in much of the U.S. and has also been introduced commercially as a pesticide. Here is some information on the fungus: http://www.bioone.org/doi/abs/10.18474/JES16-26.1

To increase your success in controlling pest insects, make sure to plant a substantial number of plants they favor. Watch my podcast and slide show with Dr. Doug Landis for more information on this topic:
https://www.ecobeneficial.com/audio/interview-dr-doug-landis-research-beneficial-insects-native-plants/

From Kim Eierman at EcoBeneficial