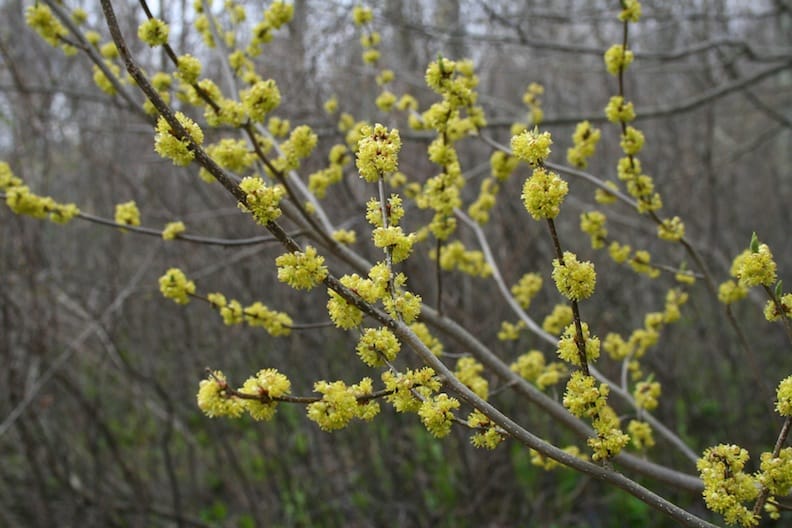 Can you suggest a native alternative to Corylopsis (Winter Hazel) for New York?

There are several Corylopsis species that have been used in American gardens – all notable for their early spring bloom. Corylopsis are native to Asia, and while they are nice plants and have not shown any invasive tendencies, they are not the best ecological choice, as they have not evolved with our native species.

My choice for an early blooming native alternative would be Lindera benzoin (Spicebush). Spicebush blooms in early spring, sporting fragrant, yellow flowers that appear before the leaves do.  These flowers are a forage source for some bee species that emerge in early spring. While Corylopsis will also attract some bees, Spicebush really kicks up the ecological value as the growing season continues.

Spicebush is a host plant for several butterfly and moth species – a trait that cannot be matched by the non-native Corylopsis. The caterpillars of Spicebush Swallowtail and Eastern Tiger Swallowtail butterflies and the showy Spicebush Silk Moth (aka Promethea Moth), all use the leaves of Spicebush as larval food. If you want butterflies, you must have host plants – nectar plants are not enough.

In the fall, Spicebush produces small red berries on female plants. These berries are important to fruit-eating migrating birds as they prepare for their journey South. Unlike the fruit of some invasive exotic plants, like Japanese Honeysuckle, Spicebush berries deliver the right nutritional profile to migrating birds – critical to successful migration. The dried berries can also be used in cooking as a peppery spice to flavor a dish – sometimes sold as Appalachian Allspice.

Spicebush performs best in part sun to part shade with sufficient moisture, but will also grow in full shade. It’s a great substitute for Forsythia, another Asian species that offers little to our local ecosystems and is wildly overused.